Written by Lynne on September 23, 2019. Posted in missional, research.

The NZ Census data was released today, and the religious affiliation data makes sobering reading.
As expected, the number and proportion of people with no religion has overtaken the number and proportion of Christians. Massively.
Just 36.99% of New Zealanders state an affiliation with a Christian religion.
48.19% state that they have no religious affiliation.
A quirky 6.66% objected to state.
Other religions:
Buddhist 1.12%
Hindu 2.63%
Islam 1.31%
Jewish 0.11%
Maori religions 1.33%
New age etc 0.42%
Other 1.94%
I’ve started to do some comparative work with previous years’ data, plus denominational breakdowns (and match ups).
More tomorrow.

Written by Lynne on September 23, 2019. Posted in missional, research.

However, as we seek to make sense of the implications, there are a few things to be aware of.

It is also important to note that the wording of the Religion question changed dramatically from 2013 to 2018. In 2013, there was a tick box of options, replaced in 2018 by on open-ended question, inviting a thorough response (“Give as much detail as you need to name your religion, eg Presbyterian, Ratana …”). For Christians, the new wording was a perhaps difficult. The question, “What is your religion?” would, for many, be answered, “Christian” rather than specifying a particular denomination, but the examples provided presumed that a denominational affiliation was required. This change in wording is likely to account for some of the drop in denominational affiliation, and the concurrent increase in those who stated they were Christians, without necessarily further defining a specific denomination (the number of those who responded “Christian” was up 42%, from 216,177 in 2013 307,926 in 2018). (More on this next time.)

Everyone responded
Another key difference in 2018 was there were no reported “no responses”. When you consider that nearly 350,000 people did not respond to the question in 2013, this is a major point of difference that needs to be factored into interpretation and analysis. I need to check for sure whether it was compulsory to answer the question in the online form, but if that was the case, as I presume it was, this would likely increase the number of people selecting the “No religion” or “Object to state” boxes (and perhaps account for some of the 4,000 “Church of the Flying Spaghetti Monster” affiliates!) Alternative data sources, including previous census data were used to fill gaps. (Again, I am not clear if that was just for paper-based forms, or if it was also necessary/possible on online completions.)

So…
Proportion of Christians is definitely way down.
Actual numbers of Christians has also dropped, but less dramatically.
In 2013, 350,000 people skipped the question. Not the case in 2018. I suspect that is makes the difference between the 2013 and 2018 data larger than it would have been if people had been required to state in 2013, when they would have ticked the “object” or “no religion” box, rather than choosing one of the religious affiliations. 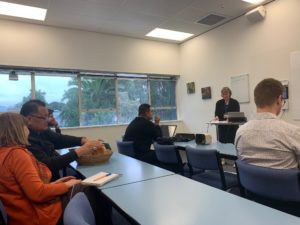 It was great to explore how we might adopt embodied, multisensory spiritual practices that help build towards faith and faithfulness… Drawing on Jesus’ “I am …” statements in John.

It was great to present yesterday at Otago Theology’s Trajectories conference.
My paper explored the following (at pace, and with an engaged group of participants):

See-Judge-Act scripture reading: what does a model born in Europe and fruitful in Latin America and Africa have to offer Aotearoa?

The See-Judge-Act process of reading Scripture together in a small group originated in the European Catholic worker-priest movement in the 1930s and 1940s. This model of scripture engagement later thrived in the Latin American context, amongst people dissatisfied with Western biblical scholarship and its lack of emphasis on the poor and oppressed. It has also been fruitfully employed in African nations. The author adapted See-Judge-Act for use in a university student congregation in Dunedin.

As a bible study model, See-Judge-Act offers a way of both inviting reflection on one’s context and experiences in the light of scripture, and of encouraging action towards transformation. This means of exploring the scriptures brings the lived experiences of the participants into conversation with the context that the group finds itself in, as well as with the actual text of the bible passage.

This paper explores the origins and potential of this bible study model, outlining its significance in various contexts. It then invites participants to briefly experience See-Judge-Act: following a process of sharing stories of the week past, reading a selected passage, reflecting on standardised questions about the text, and moving to consider the implications of the text for life. Once experienced, we discuss the strengths and weaknesses of See-Judge-Act before concluding by exploring its potential value for churches in Aotearoa New Zealand.