I’ve recently had a new article published in Witness (a USA-based journal). At the moment, it’s only available to members and subscribers, but I am permitted to provide a copy of it here on my blog. I’ve also included the abstract below.

I didn’t expect to go there, but analysing the data from the case study church took me back to my PhD research on contemporary conversion.

The covid-19 global pandemic radically interrupted all areas of life, including forcing churches to adapt their worship, mission, and pastoral care within new constraints of physical distancing. This article explores a case study of how one church communicated the message of faith; connected with, and cared for attenders, the wider community, and others; and experimented with different forms of worship and ministry during covid-19. Drawing on data from a questionnaire, focus groups, interviews, content analysis and participant observation, the article demonstrates the importance of amplifying a message consistent with one’s values, providing opportunities for warm connection, and continuing to make iterative change to ministry practices.  Considering this alongside recent research on contemporary conversion, the paper affirms the significance of relational authenticity in engaging in Christian witness, including when the church is forced into unfamiliar and undesired realities. Churches can be encouraged by the potential fruitfulness of multiple voices communicating the significance and meaning of their faith; being honest about life’s challenges; and encouraging and resourcing engagement in spiritual practices as means of Christian witness, including in challenging times.

Taylor, L. M. (2021). “Reaching Out Online: Learning From One Church’s Embrace Of Digital Worship, Ministry And Witness.” Witness: The Journal of the Academy for Evangelism in Theological Education, 35, 1-14.

I’ve just sent someone an article that I wrote a number of years ago about older people in the church.

It encourages taking a holistic approach to what it means to be human; looks at the sorts of resourcing a local church can provide to older people; affirms the need for places of connection; and recognises the need for all people to have ways that they can offer themselves and their gifts for a wider purpose.

Interested? You can download it here (It should go directly to your downloads – if you have any difficulty, flick me an email :))

Written by Lynne on August 1, 2019. Posted in life, pastoral, Uncategorised.

Abstract proposal in response to a call for papers on spirituality and mental health:

FOUR WALLS, FOUR DOMAINS AND FIVE WAYS:
EXPLORING TRANSCENDENCE AND WAIRUA IN MENTAL HEALTH AND WELLBEING
Despite the significance and acceptance of Mason Durie’s “Te Whare Tapa Whā” model of health, the Mental Health Foundation’s “Five ways to wellbeing” material contains no explicit reference to spirituality/wairua, thus seemingly neglecting taha wairua. While some note potential connections, further exploration and nuancing in relation to the place of spirituality in the “Five ways” is required.

Fisher, Francis and Johnson’s “Spiritual Health via Four Domains of Spiritual Wellbeing” (SH4DI) model helpfully extends spirituality beyond an emphasis on the divine as the object of one’s spiritual focus. Alongside God, their model names self, community and environment as domains of spiritual wellbeing. A weakness of the SH4DI, however, is its potential to limit transcendence to one aspect of spirituality (relationship with God or Transcendent Other), rather than considering how transcendence relates to each of those domains.

This paper places “Te Whare Tapa Whā”, the SH4DI and “Five ways to wellbeing” in conversation. It considers how transcendence may be experienced in each of Fisher et al’s areas of spiritual wellbeing and focus (personal meaning, interpersonal connection, environmental concern/appreciation, and “religion”). This approach is then applied to the Mental Health Foundation’s “Five ways to wellbeing”, exploring how each might relate to transcendence. The paper concludes by returning to wairua, making explicit the potential relationship between each of the “Five ways” and spirituality. 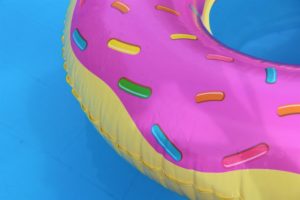 It’s a pretty warm one here in Dunedin
(by Dunediny standards, at least – a good deal cooler than the Aussie experience!)

I’m listening to the music and splashing (and beer can opening) of the guys from the flat below my office:
they have wisely taken up residence in a paddling pool.

As I listen, I’m reminded of Psalm 1.

We’ve sung it a couple of times over the past few weeks at Student Soul.
Happy are those … [whose] delight is in the law of the Lord,
and on his law they meditate day and night.
They are like trees
planted by streams of water,
which yield their fruit in its season,
and their leaves do not wither.
In all that they do, they prosper.

There is something about being REALLY HOT that brings this passage to life. As I fill my water bottle again, I pray that in all of life I will be refreshed and sustained by all the wisdom of God. And I pray that for you too! 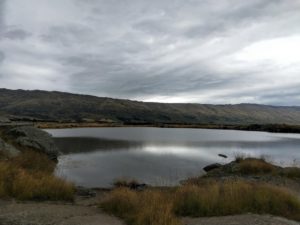 I enjoyed a walk around the Sutton Salt Lake on Sunday.

We’d done an airport drop off and decided to keep heading west, to Middlemarch.
After lunch and a wander of the street/s, we stopped off at the salt lake.

We had visited once before.
As I led the way (a little briskly due to the promise of rain – both in the sky and forecast),
I remembered the sensation from our last visit:
of not knowing where I was going to end up.
The landscape appeared flat, yet there are also moments when you seem to be approaching a crest.
Surely, the lake will appear at some stage.

Also, looking ahead, it wasn’t always obvious where the path was.
But, if I kept looking into the shorter distance, there was always a clear way through the next part
– and that clarity was consistently present before me as I kept walking.

We can have a sense of what our destination is,
and see a little part of the way forward,
but we don’t need to be able to see the whole track.
And that is OK. Normal.

I could have stood, debilitated, scanning the horizon, trying to see where the distant path was.
But there was no need.
All I needed to do was to follow the trail before me.
The rest was revealed as it needed to be.

The lake eventually appeared.
Was appreciated. Briskly (that potential rain, again).
The sounds of a family playing in and near the water.

And a continuation of the trail that led me back to the car.

It worked for a walk.
Why? Because there was somewhere I was going (or at least, I had a sense that there was a recommended destination ahead: in truth, the first time I visited, I had little idea of what that destination would look like).
There was a path that led me there.
I followed it.

It seems it might work for life too.
We have an idea of where we are going.
We take steps to get there, trusting that the path before us will continue to be revealed.

Thanks for stopping by my blog! This is a spot where I share some thoughts about life, spirituality, mission and ministry.
I live in Dunedin with (hubby) Steve, and our young adult daughters. And a cat. (Don’t forget the cat.) l love our views of the harbour, as well as the birds that serenade us daily.
Work-wise, I like variety, which is just as well! I’m Somerville Lecturer in Pastoral Theology at Otago University; co-leader of Student Soul (a student congregation); and I also do a little research and consultancy for various not-for-profits – churches and denominational agencies mostly.
I grew up in Christchurch, and have also lived in Auckland and Adelaide.
Overall, I’m passionate about helping people connect with God; and about seeing them become the people that God has made them to be.